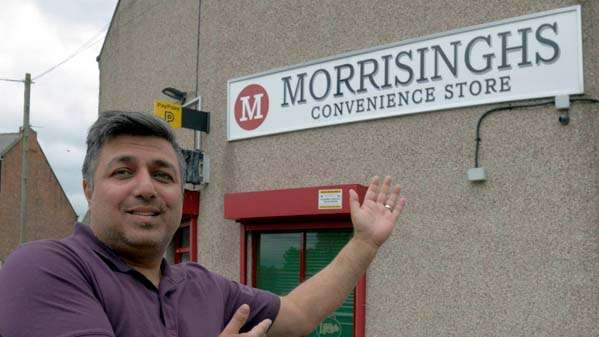 If you’re British, and maybe even if you’re not, a punny name for a shop or a product is guaranteed to tickle you. Our favourite one today is Morrisinghs, originally Singhsbury’s. You couldn’t make this up!

The story behind this is as hilarious and heart-warming as is the name. The 42 year old Jel Singh Nagra from Stockton-onTees. Bought the shop when it was called Singhsbury’s. Due to legal action from Sainsbury’s, he was forced to change it.

So after encouragement by his customers, he chose the name “Morrisinghs”

“A lot of the customers come in here for the banter more than the actual service. But I do feel that the sign is bringing more business in.”

So there we have it, genius wordplay does help business. Jel should have told the owner of Sellfridges to keep it going!

As much as I appreciate this great man and his creativity, I do wonder if he’ll face further litigation, this time from Morrisons. If that happens he might have to rename to Singhrose, or  Singhco. Actually, maybe not..

Fear not though, a spokesperson from Morrisons suggested they were flattered by Jel’s name choice.

“Mr Nagra and his customers obviously have good taste so we wish him well.”