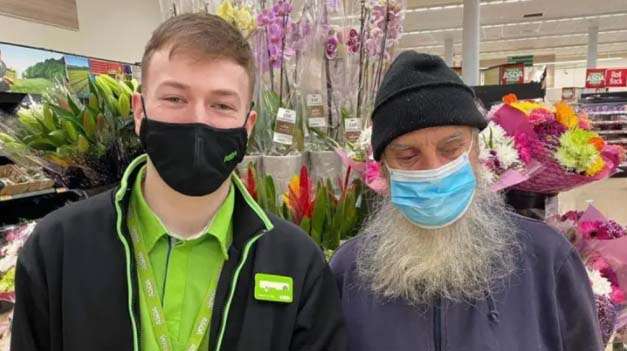 This is one of those feel-good stories that reminds us that Retail Workers are always out there to help people who are in need.

Michael Fuller, a seventy-one year old has been blind since birth. He regularly visits the Strelley ASDA superstore in Nottingham UK. It’s obviously pretty difficult for him to find what he needs. And this is where 23 year old ASDA worker Kieran O’Rourke lends a helping hand. Kieran takes him by the arm and leads him round the shop, packs his bags and helps him out with the money he needs AND helps him across a busy road back to his house!

Michael admits without Kierans help he would be lost. For his compassion, Kieran has been nominated fpr an ASDA Service Superstar award!

Michael said “Kieran’s such a nice, helpful lad; it’s such a pleasure to do my shopping with him”

“Before we start off I will give him a rough idea of what I’m looking for because I know where most things are in the store and in what order we need to go. Kieran remembers what I usually get and he also points out new items and things I may like too.

“I go on most days and that’s the idea so I don’t have to get an awful lot all in one go.”

“The store’s on a very, very busy road. Getting there is traumatic enough, but I do need some help getting back with my shopping and Kieran kindly brings me back. He is really, really good.”

Helping Michael out over the past three years since he joined the store has been no trouble whatsoever for Kieran.

“[Michael]’s a really good bloke and he’s always saying that our store is the best. We’ve developed quite a bond and we get on really well.

“Michael doesn’t do big shops, but comes in for bits and pieces almost every day. He doesn’t have a list, he just does it from memory. He may come in twice a day if he’s forgotten something!

“We talk about all sorts really – how his wife is, what he got up to when he was younger. He loves cooking and is always giving out tips too.”

“I think it’s nice to treat someone the way you would like to be treated if you were in a similar situation,” he added.

Shoppers have been showing their appreciation for Kieran’s efforts when the story was posted online.

One person wrote “Great staff and great store for allowing their staff to give such a great service. Bravo Kieran, what proud parents you must have!”

Another expressed  some emotion writing “How lovely brought a tear or two. Kieran that is a wonderful thing to do you are an amazing caring person for Michael.”

Strelley store manager Laura Morris said: “Kieran is amazing with all his customers, but with Michael he definitely goes above and beyond. Well done Kieran, keep up the great work.”