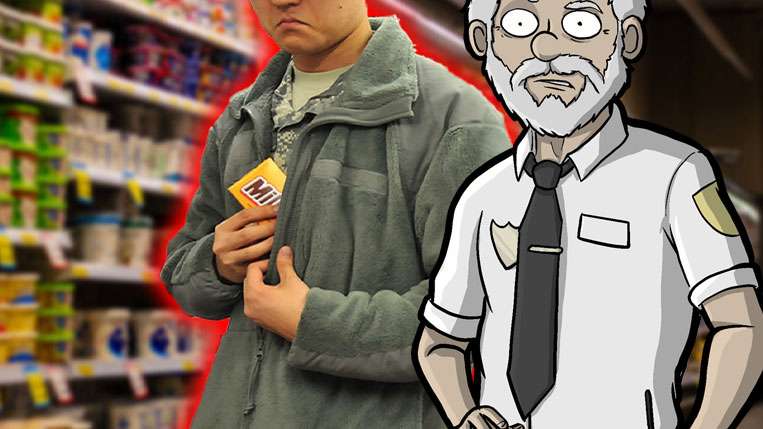 So let me start with a disclaimer first. I’m not a thief. OK, I did once take a Mars bar from Mr Jacob’s shop when I was 8, but I also did 2 years of backbreaking labour for him delivering newspapers when I was 14, so I think we’re even.

My true story of stealing comes later in my twenties during the annual stocktake (inventory for any Americans out there). Store staff were responsible for counting any items in the stock rooms, then an army of contractors would come in and count the shop floor for us.

Wondering whether these items needed to be counted, I consulted my boss who fell into an immediate panic. Apparently, until these items were wasted off (as in scanned as waste items) they were still technically stock on the books. So yes, they did need to be counted.

Unfortunately, we had less than an hour to go before the deadline to submit our final counts. So my boss told me to estimate the total cost of all the items in that area and then throw them all away into the compactor (giant crushing machine for anyone that doesn’t know!). So I loaded all the items up into a cage and headed for the compactor.

The first item destined for the crusher was a digital camera with a cracked lens. Fair enough, not gonna get any use out of that. But then it hit me, what about the battery and memory card? Both seemed fine so I took them out and placed them to one side. This exercise continued until I had a stack of items in perfect working condition.

I’m talking about laptops that had been returned because the zipper on the carry case was broken. iPods in perfect condition with missing headphones. Still sealed portable hard drives without USB cables. The list goes on and on.

Facing a crisis of conscience I called my boss again and explained the situation. I even suggested that we could sell the items to store staff for a reduced price. Anything to avoid destroying perfectly good products. But he was having none of it with a final “I said get rid of them!” barked down the phone before hanging up.

So, you can probably guess what I did next. I stuffed as many of those items into my pockets, socks and underpants as I could. Have you ever experienced the sensation of having several terabytes of storage sitting next to your balls? Because I certainly have.

Honestly, how I managed to get out of the store without getting caught is still a mystery to me. I knew that security would be light given that the guards were helping with the count. But I still had to talk to a dozen people (including my boss) before I was able to escape the store — all the while rattling away like a marching band. These fearful interactions peaked as I endured a particularly rigorous handshake from our regional manager and just about managed to avoid dropping a nose hair trimmer into his hand.

So what did I do with all the ill-gained items? I kept some for myself. I’m not gonna deny that. But gave most of them away to family and trusted friends. Do I feel guilty? Not a bit! I was working at a store that made over a million pounds a week. They could comfortably throw all of that stuff away without a second thought. But to me and my family and friends, those items created little bits of joy. Would I do it again? In a heartbeat.

Now I have a couple of questions for you. Did you think the worst about me when you read the title of this confession? And more importantly, do you still feel the same?