This product will give you clean hands, but might also leave you with a red face. I’ll leave it to your imagination what you make of it, but Stacey Jane was left in hysterics during her weekly food shop at Aldi in Rustington West Sussex. 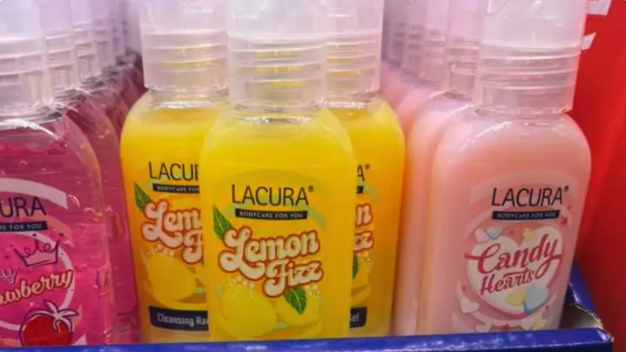 Nail technician Stacey, from Worthing, West Sussex, said: “I thought, ‘Oh, that’s new,’ [then] looked at it and thought, ‘Oh my lord.’

“To which I just burst out laughing in the middle of Aldi and people were looking at me like I’d completely lost my marbles.”

She continued: “It was one of those things where you think I have got to take a picture and I have got to share this because it’s hilarious.

“I thought people would find it so funny and it would cheer everybody up.

The mum added: “I shared it on my Facebook as well as the Aldi page and mostly people were laughing at it. They knew immediately, for sure. If they’re laughing at it then they knew what I saw.

When you bite into the pie, the pastry falls away and you encounter the reconstituted mess of pork, lard and hydrogenated oil. Lovely!

The nightmare food amongst sufferers of trypophobia (fear of holes) crumpets are pucks of yeasty sponge matter with holes in.